Influenza infections or respiratory tract infections of varying severity are the most common reasons for GP consultations and also pose a major threat to the patients in the clinic. In today's routine clinical practice, identification of an infectious pathogen takes up to 5 days, which means that the pathogen-specific therapy can only be initiated late. This leads to higher costs for the health care system due to prolonged hospital stays and to delays in the recovery of the patient, and in the worst case - e.g., due to the onset of sepsis - even to death. In addition, resistant pathogens can develop as a result of the improper administration of antibiotics, causing increasing problems in everyday hospital life. The pathogens that settle in the lungs produce specific metabolites - Volatile Organic Compounds (VOCs) - which leave the body via exhalation, among other routes. Ion Mobility Spectrometry coupled with Gas Chromatographic pre-separation

(GC-IMS) is a rapid, high detection, safe and robust method for analyzing gaseous samples at trace levels. This allows to detect the pathogen-characteristic metabolite patterns as a "fingerprint" of VOCs over cultures after only a few hours. Within the framework of the InosIn project, the detection of these patterns is now to be transferred to the detection directly in the exhaled air of patients using the example of some clinically relevant pathogens. With such a fast, highly sensitive and non-invasive method, the pathogenic agent can already be identified in the early stages of an infection, which then enables an early pathogen-appropriate therapy. Thus, for the benefit of the patient, the recovery process will be accelerated, possible complications avoided and the length of stay in hospital shortened, which in turn will reduce costs for the healthcare system and additionally avoid the development of resistance. 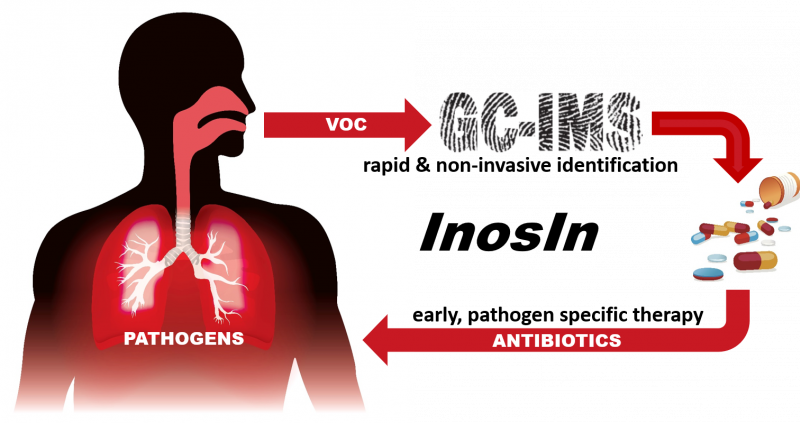 As part of the IonsIn project, the pathogen-characteristic metabolite patterns for selected, clinically relevant bacterial pathogens will first be investigated via cultures in order to subsequently transfer these results to detection in exhaled air. For this purpose, a GC-IMS demonstrator will be set up and adapted with respect to selectivity and detection strength. After successful standardization and verification of the method, the measurements will also be performed directly from the exhaled air of patients. The results of the breath analyses will finally be validated with the findings from classical microbiology and by means of an analytical method to be developed based on gas chromatography coupled with a mass-selective detector (GC/MS). The GC/MS will also be used to identify specific marker substances that are still unknown today, which will then be combined with the already known markers to create a pathogen-specific substance database.